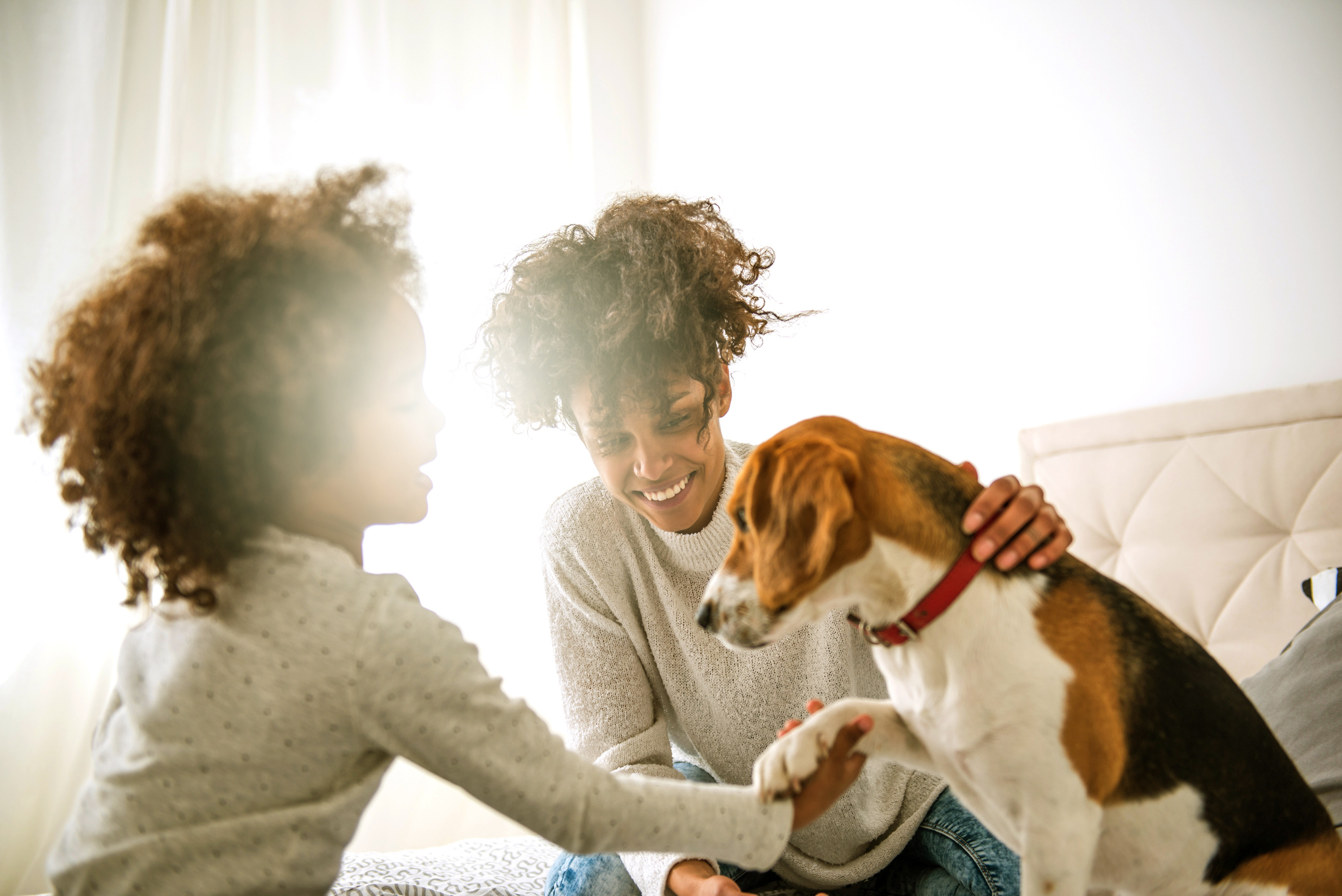 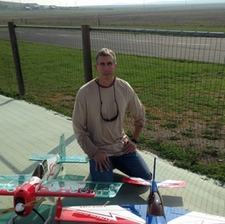 I attended Southern Illinois University, and received my Bachelors of Science in 1988, and then my Master’s in Animal Science in 1989. I graduated from the University of Illinois School of Veterinary Medicine with my doctorate of veterinary medicine in 1993.

I performed emergency medicine at Champaign Urbana Emergency Clinic in Illinois and Mueller Animal Hospital in Sacramento until my wife Lisa (who is also a veterinary internist and oncologist) and I purchased Jackson Creek Veterinary Clinic in 1996.  We wanted to do the best medicine we could and treat every patient as if they were our own. Our original clinic was on Jackson Gate Road next to Teresa’s restaurant and it quickly grew. We built our current location in 2000.

I was honored by the Morris Animal Foundation & Hills Pet Nutrition in 2010 as one of the top five veterinarians in the nation, taking first place for the western region, and am incredibly humbled that my clients nominated me for such an honor.

We have 2 children, Michaela and Dylan. There is a multitude of dogs, cats, and chickens. Some of my passions are flying Remote Controlled planes with my son, Miniature Armour modeling, weight lifting, and being with my family.

At this point in my career, I have decided to stop taking regular appointments and will focus instead on performing spay and neuter surgeries for our local Animal Control and humane societies. 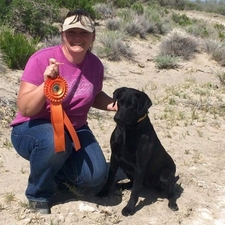 Hi, I’m Dr. Stacy! I received my Doctorate in Veterinary Medicine from the University of California at Davis in 2002, and have been with JCVC ever since I graduated! I love reproduction and enjoy performing artificial inseminations, breedings, and cesarean sections.

I have French Bulldogs that I enjoy showing at conformation shows and Labrador Retrievers, a couple of cats, and a pig named Rosie. We also have a lot of chickens! My husband and our two daughters help collect eggs every day. As a family, we enjoy gardening and farming on our land, Prospect Farms. 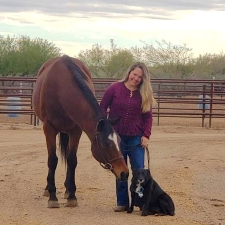 Dr. Miranda Ciotti-McClallen will be graduating from Midwestern University School of Veterinary Medicine in Arizona this May and joining us at the end of June!  She is excited to be coming home to Northern California and becoming a positive part of the Jackson community! Her love for all animals started at a young age, growing up as an only child with her family Labrador Retriever and Brittany Spaniel, which were like sisters to her and wonderful adventuring companions. Dr. Miranda grew her experience with a variety of wildlife species working as a volunteer at San Diego Wild Safari Park on weekends during high school, and with horses as an avid horsewoman trail guiding in Patagonia, Argentina, and through the redwoods off the North Coast of CA for two seasons after college. Her varied experience working with and caring for different animals left her with a longing to pursue a career helping make a difference in the lives of animals and their owners in an impactful and positive way.

Her passion for veterinary medicine grew as she gained experience in the field at Placer SPCA assisting in shelter medicine, and a small animal veterinary practice in Washington while finishing her college degree in Zoology. Throughout her veterinary medicine career, she has developed a keen interest in preventative medicine, surgery, dentistry, integrative medicine including acupuncture, and mixed species medicine including working with equines, farm life and limited exotics. She has a passion for client education and community outreach.

In her free time, Dr. Miranda enjoys anything that gets her outside whether it be riding her horse, hiking with her dog and husband, or enjoying a good book in the sun! She is very excited to get started at JCVC and to meet you all and your fur family! 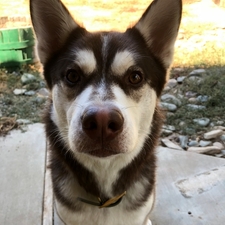 Hi! My name is Aimee, and I started with JCVC in July 2018. I’ve had animals of all shapes and sizes and am thrilled to have the opportunity to work with them every day. My favorite part of working here is getting to know all of our clients and their furry, feathered, and scaly kids.

I have a Siberian Husky named Jasper and a cat named Beavis. In my spare time, I like to relax at home or go hiking with my dog. 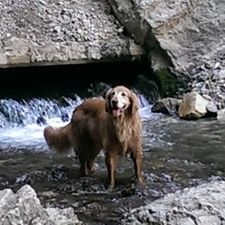 Hi, my name is Jeanette. I have worked with animals since 1982 when I worked for a veterinarian in the Bay Area, and have been with JCVC since 2004. My love for all animals is what made me want to work in the veterinary field. My favorite part of working here is helping and educating clients to care for their pets.

I had a Golden Retriever named Chico (pictured to the left). 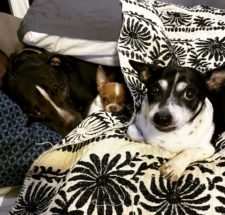 Hi, my name is Jamie! I started at JCVC in January of 2020.  Before that, I worked at another veterinary clinic for 7 years. My favorite thing about working here is getting to see all the animals that come in.

I have 2 Chihuahuas named Goose and Petey, a Pit Bull mix named Ellewyn, and a cat named Lilly. In my free time, I enjoy photography and hanging out with my husband and our son. 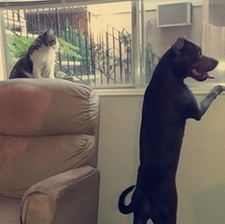 Hi, my name is Cyntia! I joined the Pet B&B family in August 2018.  When the B&B closed in December 2020, I moved to the JCVC side as a receptionist. My favorite part about working here is getting to meet the new pets that come in and, of course, getting to see all my usual ones that come in regularly!

In my free time, I like to go on bike rides, runs or just relax at home with my 2-year-old Pit Bull Terrier mix Gracie, and my 1-year-old kitty Cali. 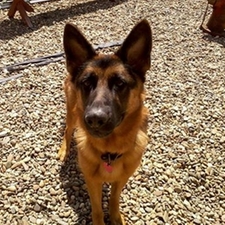 Hi! My name is Tanya. I grew up in Oregon, and worked for an Oregon humane society for 8 years, as well as volunteering at a wildlife rehabilitation facility, and working with fish habitats and Bald Eagle nests. I relocated down to Amador and became a part of the JCVC family in 2005.

I am a huge German Shepherd lover, with two of my own named Echo (in the picture to the left) and Brinks, as well as a Queensland Heeler named Zip. 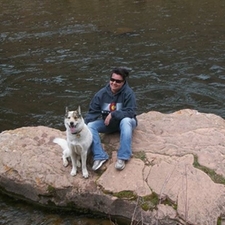 Hey, my name is Jennifer. I joined the JCVC family in 2005, and have been working with animals for 26 years. My favorite part of working here is helping animals.

I have three dogs, Teva, Brizzie, and Aspen, and two cats, Raven and Hemi. In my spare time, I enjoy traveling and hiking with my dogs, as well as cooking and just relaxing at home. 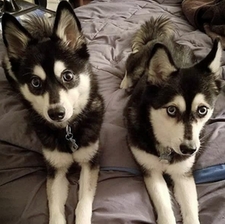 Hey, I’m Erica! I completed a Medical Assisting program at Carrington College & worked in that field for about 5 years. I started working at JCVC in 2017 & it has been a huge change of pace, for the better, from human medical care. I love coming to work every day to see the animals; it always puts a smile on my face.

I currently have two Alaskan Klee Kai dogs named Kiba & Kiana. I also had a Red Eared Slider named Thrash & a Bearded Dragon named Spyro. My main hobby is dancing; I have been in tap since I was 4 years old & am now teaching! We look forward to seeing you & your family soon!